I think it’s safe to say that these last couple of months have been challenging for most of us.  So it’s heartwarming to hear how Rachel, one of my regular weekly students has handled the changing situation admirably!

Just prior to the lockdown, I purchased a pattern and fabric for the Freddie dungaree dress by ‘Two Stitches’ for my little girl, with the intention of making it during my regular Tuesday evening class. Then sadly the lockdown was announced, and classes were put on hold; which in my mind meant that my cute toddler dress idea was also sadly shelved. 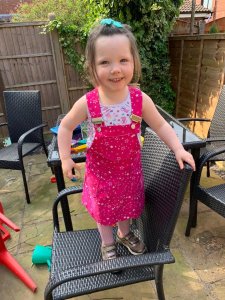 However, Janet established a way to stay connected to her students and offered not only an online weekly group project lesson using the Zoom platform, but also a 30 minute one-to-one session to discuss personal projects.  I was trying to think of what I could make, when Janet suggested trying to make the dress as she had successfully managed to do an online dress fitting during one of her previous sessions.

If I had to stay in the house, I thought I might as well try a challenge.  I do not have a sewing space as such, so my husband set up a little fold up table in our lounge on which I was able to set up my sewing machine.  After chasing my toddler around the house trying to ascertain her measurements, I was ready for my one-to- one session.

Online one to one tutorials

Using my iPad, I logged into the meeting invite and was able to have a video call with Janet. In the 30 minutes we had, we were able to discuss most stages of the pattern and things to watch out for, e.g. how to check the nap of each piece so each is cut in the same direction, the amount of seam allowances and which parts to overlock , as well as the order of assembly.

By the end of the session I was confident that I could make a good start. I was surprised and pleased at how quickly I managed to progress and felt brave enough to attempt buttonholes on my own. After a few successful test ones, I was ready! 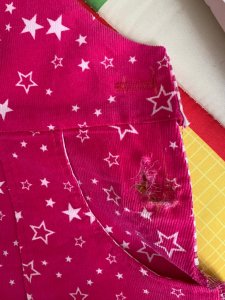 However, during the second official buttonhole, my machine jammed! I then somehow managed to create a huge hole in the fabric whilst unpicking!  After messaging Janet, she explained that she could show me how to fix the problem, using the online platform.

Thankfully, the hole was near the front pocket and Janet was able to show me how to measure, remove and recut a new piece of fabric to attach with the seam hidden inside the pocket. I was really impressed with how neat the end fix looked and all this was taught with me in front of an iPad with my dress, chalk markers, seam guide and pins. Janet also gave advice on using the buttonhole stabiliser attachment, due to the baby cord fabric possibly dragging against the standard foot.

All was going well until I realised, I had used the back pattern piece as my scrap on which to test my button holes!! After cutting another piece of fabric, I then realised (after about ten minutes of puzzling how two shapes were meant to go together) I had cut another front bib piece instead!  Fortunately, the back piece was smaller so it was still possible to re-cut from this.  Note to self- keep paper pattern pieces attached to fabric until ready to use! Either that, or label each piece to save confusion and time! 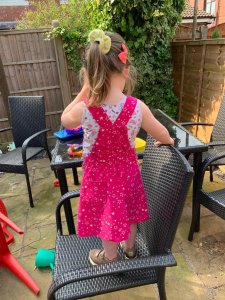 back view of pinafore

The most difficult bit was sewing the buttonholes.  My husband attached the jean style buttons for me. Even though I had to ‘fix’ a section and re-cut a new bib piece, I am really proud of what I have achieved.

In a way, making the mistakes was a positive, as I now have a better idea of how repairs can be made to clothes. Plus, my toddler is none the wiser! She is just happy she has pockets! Now I might attempt the dungaree version of the pattern, especially knowing that I’m not on my own and I can still get support from Janet via the lockdown online sessions!

Until group classes can resume, we are continuing to offer online tuition and support via the Zoom platform, as well as 1-1 tuition at the studio, with safety measures in place.

If you’d like to give online tutorials a try, or to book a studio session contact Janet for details.